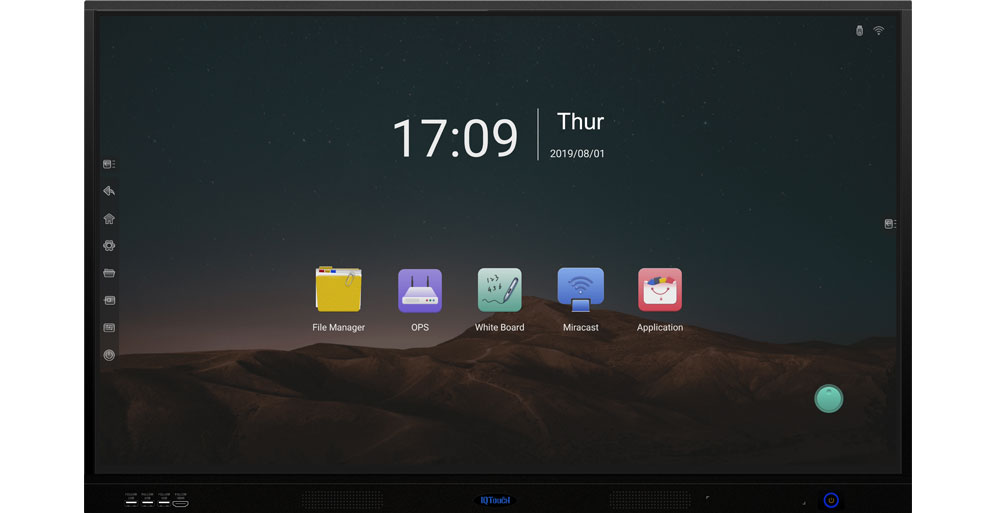 To find the best interactive touch screen display can be a difficult thing to do. With so many available in the market, it’s up to you to decide which features are important to your school and classrooms. This article will look at some of these options and examine an alternative solution.

It is also important that your chosen whiteboard offers good enough visibility for the whole class to see it properly. Viewing angles and screen brightness are often serious issues in classrooms, as many still rely on projectors and front projection screens to display content. Front projection screens in classrooms can present consistent problems for teachers, primarily causing shadows, calibration issues and that’s not to mention the general care to be taken over projectors which are subjected to heavy use. With this, also comes other considerations, such as classroom lighting levels, projector settings, projector bulb life, screen brightness and viewing angles. These are things that need assessing in depth before purchasing an interactive front projection screen for a classroom.

IQTouch LCD Touch Screen Display offers an alternative solution which counters many of these problems. IQTouch series has a high brightness backlit LED panel, offering great visibility from every angle, even in brightly lit environments such as classrooms.

In recent years, many schools have started to utilise the benefits of the internet by engaging online with international ‘pen pals’, fulfilling elements of the curriculum. IQTouch LCD Touch Panel offers the ultimate solution for this, being equipped with an integrated webcam for simple video conferencing, making entire classroom conferences possible.This may also be beneficial for higher educational facilities such as Universities or Colleges, who may wish to feature video conferencing as part of their seminar structure.

Permanent PC ‘stations’ are frequently utilised by Primary schools or smaller Secondary schools, with many other educational facilities opting to supply staff with laptops. IQTouch LCD Touch Panel series facilitates both these approaches, offering easy access front connectivity for HDMI and USB. The ‘shared-room’ life of a secondary school teacher or University lecturer is ideally suited to this screen, allowing for fast connectivity to a laptop via an HDMI port.

We have a plug-n-play OPS as an additional extra to our IQTouch LCD Touch Panel series. The picture is as below for reference.

Excellent touch accuracy and response times are highly important, yet rarely prioritised features in a classroom whiteboard. As touch screen technology becomes increasingly used by both children and adults alike, tolerance for poor touch accuracy and speed is decreasing. In many schools, older interactive whiteboards are powered by even older PCs, giving rise to a noxious combination which may see the patience of any teacher or pupil slowly erode over the course of days or months of use. This subject also presents pragmatic problems, where, due to a slow response time or poor calibration, children have intended to click on one thing, but unintentionally clicked on something else entirely.

Our IQTouch LCD Touch Panel series offer one of the most accurate and responsive touch functions on the market. The feedback given from the teachers using these products stated that our screens are more sensitive and more precise than similar screens from leading brands. Since our Interactive Whiteboard does not require any additional software to operate, in the very rare occasion you may need to, you can always calibrate it through Windows, maximising ease of maintenance. Our screen is even compatible with many of the leading Whiteboard software systems, allowing you to continue using your .notebook or .flipchart files, providing you still have access to the software required to use these files. As well as compatibility, the teacher’s feedback also stated that our screen was more compact than competitor’s screens they had used previously. The feedback given also featured reference to the quality display, a lack of the annoying shadow seen from front projection screens and positive comments about the screen’s ability to serve as a large format TV screen.